Attaching an w-hook as an assist hook to the tail of Zerek Live Shrimp, I could obtain a good fishing result even from cautious barramundi.
Zrek Live Shrimp
Barramundi # 1056-1058

We had a very good rainy season.
Continual heavy rain mainly between the end of December and the beginning of March partly washed away sand and mud that have settled at bottom of the small creeks and shoaly waters.

The small creeks and shoaly waters became shallower in recent years because of the poor rainy seasons.
Many rocks that fish were using as a refuge were buried in the sand on the bottom during that time.

Now it increased about a 15cm water depth at least.
That should be welcomed.
So small barramundi are increasing in my usual fishing locations.
They are easily caught on lures when the productive fishing window is opened. 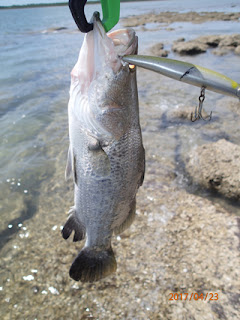 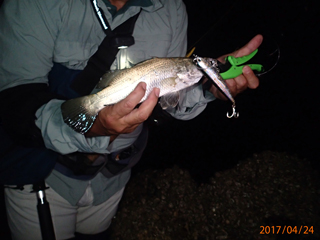 Wednesday, I went fishing to Midil creek.
There's no moon.
The tide was 7.20m at that moment.
The tide water was going out.
The water was very clear.
Attaching an w-hook as an assist hook to the tail of Zerek Live Shrimp 127mm, I could obtain a good fishing result even from very cautious barramundi. 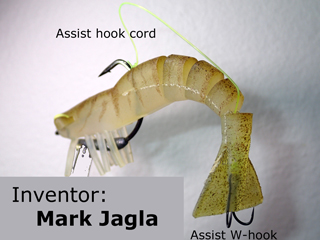 This revolutionary idea and lure were given by Mr. Mark Jagla.
Anyone can verify the effectiveness of this improvement. 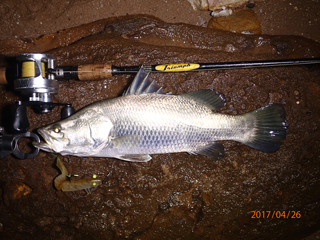 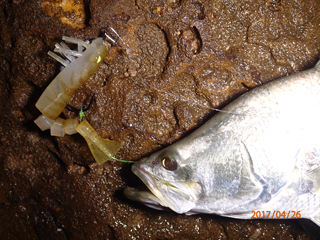 Today is the last day of the Easter break.
I went fishing to Myilly point rocks near town in Darwin city.
This place is probably not so easy to find in Mindil beach.
There are more and more anglers who can handle action movie cameras.
The action movie camera I bought recently is so fun I haven't been able to concentrate my attention on a reeling while I am hooking barramundi.
As a result, I surely couldn't hook up some fish.
Finally, I caught a 50cm barramundi on Squidgy Pro Mongrel 90mm.
The video camera was located in front of the chest.
The video started recording, when I hooked the barramundi.
Day by day and month by month technology is growing.
It's not easy to keep up with the times.
To facilitate editing of some image photographed with a video camera, I used Premier Elements 15 after I came home. 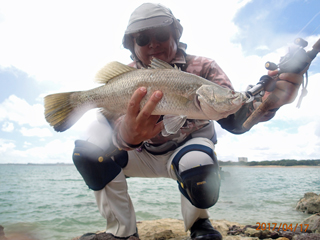 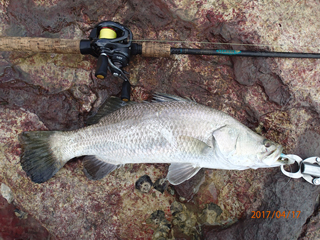 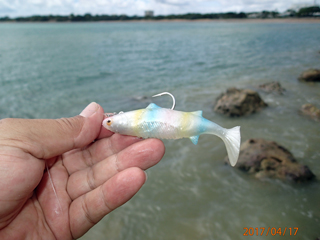 I spent my holiday in Japan.
Now, I'm in Darwin.
I had fun fishing for the first time in a month in Darwin.
I went fishing to Channel Island on Sunday morning.
Dead leaves strewed the sea surface.
That meant that much land water ran into the shallow water in the sea.
That was a minus factor for my land based barramundi fishing.
Sea barramundi doesn't like a new born land water.
I waded to look for a good sea water.
I saw a crocodile swimming nearby a month ago.
The long casting distance was demanded for the lure under the circumstance.
The wind was against me.


Four lures were to cast in the rotation.
As a result, I caught a 59cm barramundi on Squidgy Pro Mongrel 90mm.

I used a new high speed bait cast reel (8.2:1) by improving the handle grips this time.
Of course you can wind Squidgy Pro Mongrel 90mm slowly as long as you do not mind the resistance to water current. 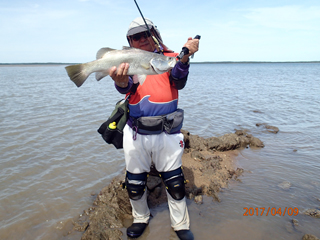 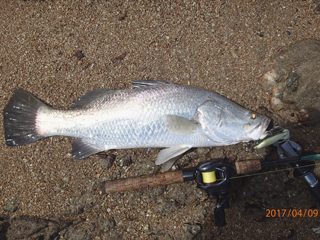 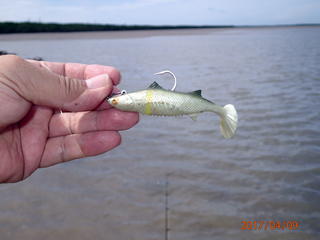 I am much obliged to Mr.George Voukolos who is the owner of Fishing & OutdoorWorld, who had a long lasting relationship since 1989.
I also have a sense of loneliness, having lived alone for so many years in Darwin. That's why I absorb myself in fishing.
Whenever I am in this shop, my heart is healed.
I can get all kinds of information from this shop in fishing. 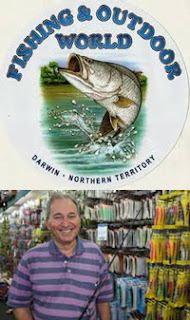 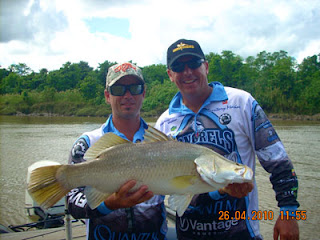 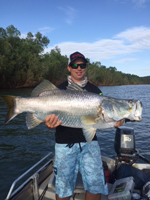 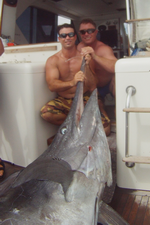 My land based fishing

My land based fishing spots originally located within 20minutes from my place by my scooter. In my case, I always fish by land based because I have no car and boat. It's a very simple reason. 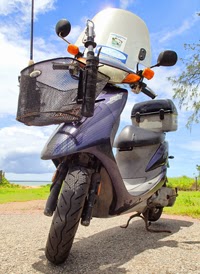 I bought my 50cc scooter in 2006. My scooter was thrown into the saltwater lake by someone before. The travel distance is over 60,000kilometers now. Thanks to the best mechanic, Callum Gumball, I'll be able to keep using this old scooter from now on. 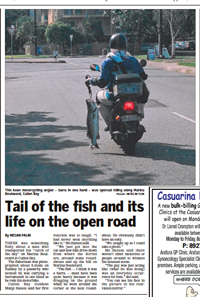 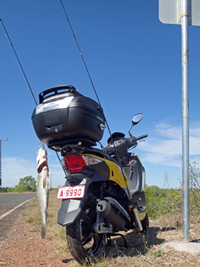 My SYM 150cc scooter was customized for my land based fishing with guarantee safety by the Scooter Shop.

The scooter shops are all good people. My favorite shop! 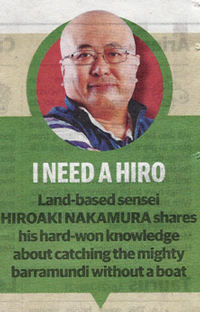 My fishing column in Sunday Territorian. 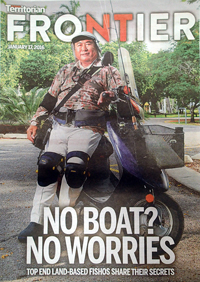 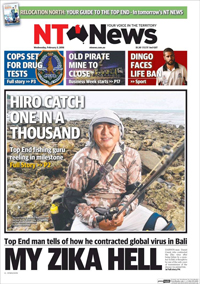 My 999th barramundi February 3, 2016 NTNews.
Thank you very much for bringing up my fishing on the front page and page 2, Judith Aisthorpe and Helen Orr.
Fishing report

My 1000th barramundi February 7, 2016 Sunday Territorian.
Thank you very much for bringing up my fishing on the front page and Page 6, Courtney Todd and Craig Dunlop.
Fishing report 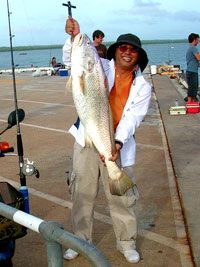 I would like to express my appreciation to
Dave Krantz
(Editor) 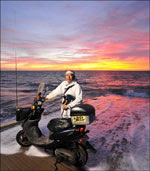 Do not keep barramundi which measures less than 55 cm in overall length.

Please see this following website before you go fishing in Darwin NT.

Computer help
Technical suport
I couldn't do without Simon.
I've no my own computer to bigin with.
Especially internet is very important to me now.
Thank you very much for your big help and kindness.
☆Simon Hipkin 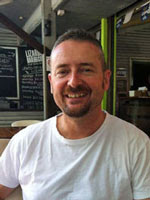 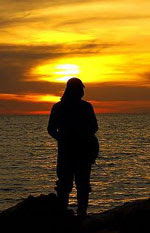 I would like to express my appreciation to
Ira Leitis Fehlberg
and
NAFA
for my blogspot in the summer No.22 edition of the magazine.

It makes you think about how many there are in the city. 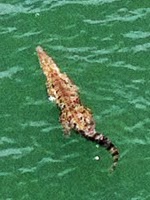 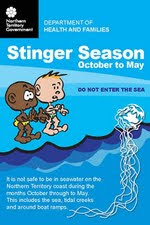 MY BOATS IN THOSE DAYS 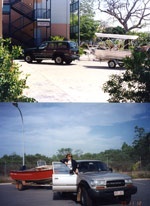 I have no boat now.

Use this blog at your own risk.

Knot for land based barramundi fishing

How many fishes a month?

How many fishes can I catch by lures a month? 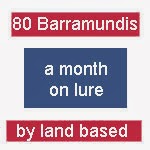 Too fast or too slow water current or very wavy water should be avoided.

The best tide shifts with the best fishing point every hour.

Where to fish by the tide?